Ex-pats Kelly Lovelady and Ruthless Jabiru plan to play one of the composer’s final commissions.

It’s just over a year since the passing of Australian composer Peter Sculthorpe, yet it seems that the man whose music inspired so many still has a few surprises up his sleeve. Aussie conductor and founder of the ex-pat ensemble Ruthless Jabiru, Kelly Lovelady, commissioned Sculthorpe back in 2012 and, although the work was never completed, she now hopes to raise the funds to allow what did make it to the page to be heard.

“I can’t remember exactly how my friendship with Peter started but I think I’d decided to write and say hello when I was performing some of his flute music in the 1990s,” says Lovelady. “I’d also read his book Sun Music around that time and his idea of the Pacific…

Last month the first anniversary of Peter Sculthorpe’s passing quietly slipped by. Some of you may remember back in 2012 when Peter accepted my commission to write a collection of miniatures for my chamber orchestra Ruthless Jabiru. Although Postcards from Jabiru was never completed, Peter’s sketches for the piece still leave us with something rich – his own impression of where we should go from here. 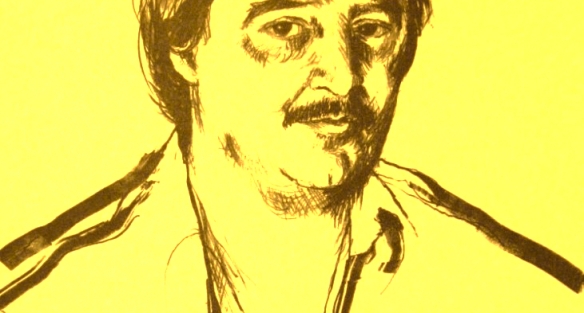 Peter spoke to me years ago of the gentle jabiru and its mesmeric leggy gait but through this project I think he wanted me to see the duality of Jabiru – as equally a pin in the map, a land, a people, a place from which postcards are sent – and a conversation starter about open pit uranium mining within Kakadu.

I often think we could do worse than to reconnect with some of our words. A wise friend taught me this year that the job of the humanities is to communicate the specific humanity of a place; to create the space of humility abandoned by politics and that true contextualisation is to find empathy with both sides.

For me, a culture is a living cell we hothouse under the microscope. Currency is a tender of presentness. To play is to improvise on ritual. And cultural Activism is a creative genre: a projection, an alternative, an Active reimagining of a landscape to light a firecracker under its audience. My programmes are about exploring these stories, using the music of today’s composers to trigger the ideas, struggles and victories relevant to us here and now. Peter’s sketches leave us with glimpses of the truths of Jabiru’s land and life that he thought we should stand up and fight for. Recast from a bird’s eye view, trailing off into empty bars, the ear leads our imagination.

I’ve launched a crowdfunder to support a unique realisation of Postcards from Jabiru here in London in late 2015. My programme will reflect Sculthorpe’s palette and his quiet engagement as a cultural Activist in music of Kaija Saariaho, Liza Lim, Eugene Birman and John Luther Adams. I appeal to your generosity in bringing this project to fruition in Peter’s memory – no contribution too small!